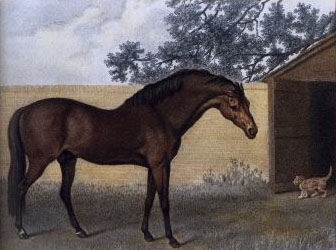 The Godolphin Horse and The Byerley Turk

The Godolphin Horse (aka the Godolphin Arabian or the Godolphin Barb) and the Byerley Turk are two of the three foundation sires of the modern thoroughbred (the third known as the Darley Arabian).

Thoroughbreds originated in England at the turn of the 18th century, identifying the three above mentioned prominent sires, and seventy-four foundation mares.

It maybe difficult to understand the full impact these horses had upon the breed, and upon all the subsequent breeds their blood poured into over the past three hundred years, however, here are some fascinating insights about the Godolphin Horse and the Byerley Turk.

“It has been said, that the sons of the Godolphin Arabian had better wind than other horses, and that his perfection of the wind was in the blood. But when we consider any horse thus mechanically made, whose levers acquire more purchase, and whose powers are stronger than his adversaries, such a horse will be enabled by this superiority of mechanism, to act with greater facility, and therefore it is no wonder that the organs of respiration should be less fatigued.” (William Osmer, 1756)

The Godolphin horse was prime example of heart, wind, conformation and power; although small in physical stature.

A horse that was ‘thus mechanically made’ was a significant contributor to the speed of the Thoroughbred, the Quarter Horse, and the power and speed of the Morgan.

“…there never was a Horse so well entitled to get racers as the Godolphin Arabian; for whoever has seen this horse, must remember that his shoulders were deeper, and lay farther into his back, than any horse’s ever yet seen; behind the shoulders, there was but a very small space; before, the muscles of his loins rose excessively high, broad, and expanded, which were inserted into his quarters with greater strength and power than in any horse I believe ever yet seen of his dimensions.” (William Osmer, 1756)

It has been documented that the Godolphin horse’s head was quite plain and large resembling the North African Barb, or the Iberian horse, much more than he did the Arabian.

According to D.C. Linsley of Middlebury, Vermont, “The Godolphin Arabian was a Barb, and from him has descended some of the best racing stock of England.” (Linsley, 1857)

Regardless of this ‘technicality’, he was a horse of the Ottoman Empire, and reflected his heritage, regardless of the ‘breed’ name assigned to him by the whims, politics and prejudices of people. He was extremely prepotent, passing his speed and conformation to his progeny. The separate and distinct testimony of William Osmer (veterinarian), Vicomte de Manty (French nobleman) and artist George Stubbs generally agree; the Godolphin horse, although small, had a plain head and ears, and the ‘position’ of his forelegs were of another concern. However, above all, he had ‘legs of iron’, and ‘unequalled lightness of forehand’, that were the drivers of his small build and high, thick crest.

He was born forty years before the celebrated Eclipse, providing a new strain of excellence. One might say he had the most significant impact on the nascent British Thoroughbred, if not for another horse of the Empire; the Byerley Turk.

Just less than a century before the birth of Eclipse, somewhere around 1680, a horse was born in a fertile valley within the Balkan region of the world. He was surrounded with opportunities for growth and development provided by the abundance in his natural environment. He matured into an extremely fast, and agile creature; possessing stamina, perseverance, intelligence and courage. He was a war horse of brilliance and beauty.

At its apex the Ottoman Empire spanned over three continents and 600 years; from West and Southwest Asia to Northeast Africa, the Caucasus and East and Southeast Europe, from 1299 to 1923. It was in fact, the largest producer of horses in the world; an impressive operation, producing huge numbers of distinguished horses. Excellent nutrition and care allowed them to grow bigger and taller than their predecessors, and the creation and maintenance of magnificent cavalry horses was performed on a massive scale.

In addition to their Army and Navy, the Empire expanded its territory and dominion with their Cavalry. They formed the Sipahis, an elite mounted regiment. Toward the end of the 17th century, horses and their grooms were called upon to go to war. The Byerley Turk was one of these horses. According to researcher and author Jeremy James:

“The timariot system could produce 200,000 mounted men on command riding highly schooled, big, beautifully bred horses without the Sultan putting a hand in his pocket. These horses were of a very particular type. Many mounted Ottoman Sipahi (cavalrymen) belonged to a chivalric order known as the Ghazi. These were, in a sense, the samurai of Islam…For a Ghazi horseman there was only one horse worth riding and that was the big, fast horses of his ancestors: the horses of the east – the Turks.” (James, On the Foundation Turks)

In representative paintings, the horses of the Sipahis are stylish, upheaded, high stepping creatures. They vary in color, and are usually depicted in solid colors with white markings. There were grey or white horses among the black, dark bay and chestnuts.

The riders’ skill and expertise as ‘horse archers’, was injected into their blood from their ancestors, which included the Huns, Turkomen, Khazars, and many other groups. They knew horses in a way that others could merely guess at. They had lived with them day and night, roamed the open land, and, in a way evolved with them.

A bond had formed between the Byerley Turk and his groom, one that was based upon trust, loyalty, and multi-dimensional communication. The horse was a supreme athlete, during a time of war and upheaval, his intellect keenly sharp and precise. His stamina and endurance was a testimony to his genetic heritage. In this way, he served his rider, performing heroic deeds with frequency and casual ease.

“The horse would have stood over sixteen hands, had a long back, plenty of bone and been deep through the rib. He’d have been long necked, had big ears, big eyes, a commanding presence and a lot of ego.” (James, On the Foundation Turks) This is concurred by D.C. Linsley, “They are large…swift and remarkably enduring. They are said to be preferable even to the pure Persian for severe service.” (Linsley, 1857)

The Byerley Turk became the property of Captain Robert Byerley after he was captured during the siege of Buda in 1686. Captain Byerley took his charger to Ireland, to fight the Jacobites at the Battle of the Boyne where the stallion’s perceptions and intellect saved his rider’s life on more than one occasion.

This horse was endowed with an epic genetic treasure that had been scorched and cultivated by thousands of years. The Byerley Turk had an incredible mind, and he devoted himself to his ‘people’. And because he was respected and adored, he would have done anything in his power to help them…

After his wartime service ended, he sired some exceptional horses ‘stamping his get’, with all of his attributes; cementing his place in modern history. His legacy was born through just 16 offspring, his sons and daughters establishing some of the fastest, most accomplished lines in Thoroughbred history. He was an extraordinary sire, and broodmare sire, and became known as the World’s first Thoroughbred.

Neither horse, the Godolphin Horse or the Byerley Turk, were autopsied at the time of their deaths – but – the possibility of their genetic gifts, including the gene for a larger than normal heart – cannot be conclusively denied. This may very well have been a trait that thrived during the Ottoman Empire…reaching out from the incredible, ancient, native stock of Central Asia…

Go Back to Chapter One: Legendary Hearts

Chapter Two: The Godolphin Horse and the Byerley Turk

Continue to Chapter Three (going back in time): A Little Equine Evolution

The Byerley Turk: the Incredible Story of the World’s First Thoroughbred

Byerley Turk in other breeds

A Georgian Masterpiece – The Development of the Thoroughbred

History of the Godolphin Barb

Godolphin Arabian on ‘I Love Horses’

Through his sire, Man o’ War is a descendant of the first English Triple Crown champion, West Australian. This male line traces to the Godolphin Arabian. 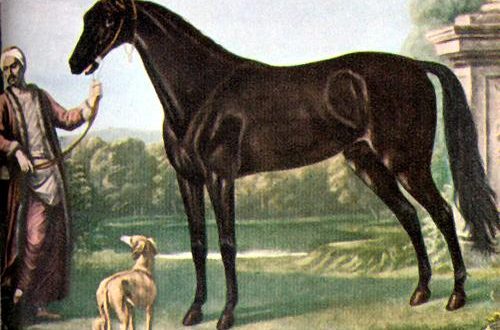 The Byerley Turk Bloodline: Preserved in Other Breeds